I don't usually participate in sports events, but when I do, it's the Color Run! 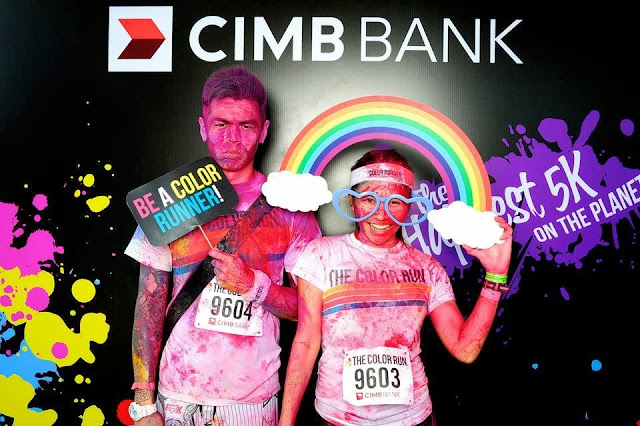 The Color Run™, also known as the Happiest 5k on the Planet, is a unique color race that celebrates healthiness, happiness, individuality, and giving back to the community.  The Color Run is a five-kilometre, un-timed race in which thousands of participants are doused from head to toe in different colors at each kilometre. The fun continues at the finish line with a gigantic “Color Festival”, using more colored powder to create happiness and lasting memories, not to mention millions of vivid color combinations. Trust us, this is the best post-5k party on the planet! With only two rules, the idea is easy to follow:

It was a spontaneous decision. Eric showed me some clips of the Color Run and the next thing you know we bought tickets to the upcoming Color Run which was happening in Singapore during the month of August.

If you have read some of my posts or have seen my Instagram back then you know that I have been training for it, in my own way. Unfortunately I have also scarred my knee cap from a fall I had during one of my outdoor runs. They're still not disappearing till this day. Bio-Oil's are expensive :( 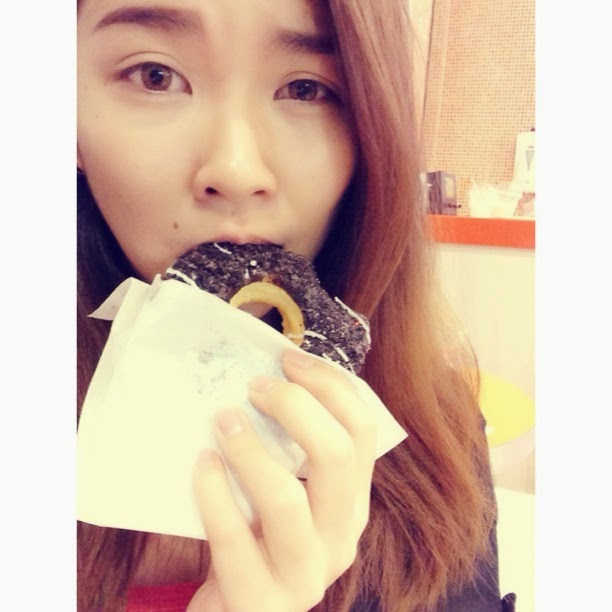 Here's me stuffing myself silly at the airport. My appetite has also become scarily huge after I started exercising regularly. It was a night flight and it got delayed for 2 hours so I succumbed to my cravings, though I did try to refrain from eating anything at first.

Tsk tsk tsk. Still very disappointed with myself for that occurrence. The situation is not getting any better. If you have seen me lately you'll understand. Before I fall further into the self-loathing pit, let us get back on the Color Run track. 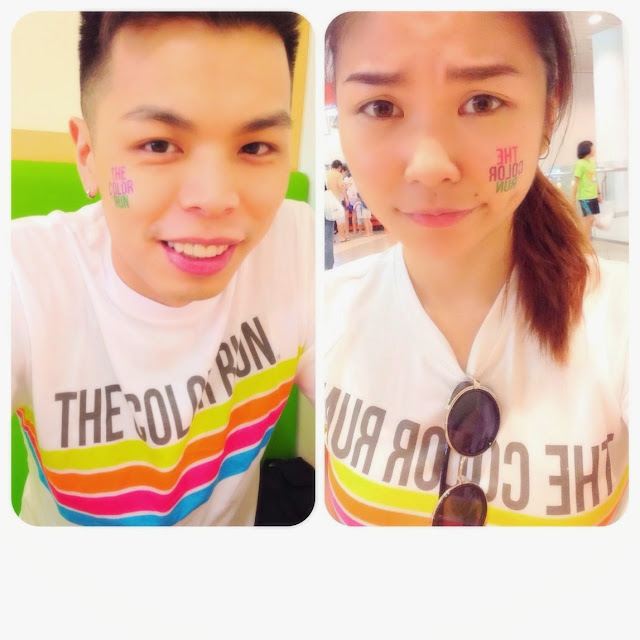 The morning of The Run. We went and meet Kellie, whom helped us collect our race packs several days before. Thank you Kellie! 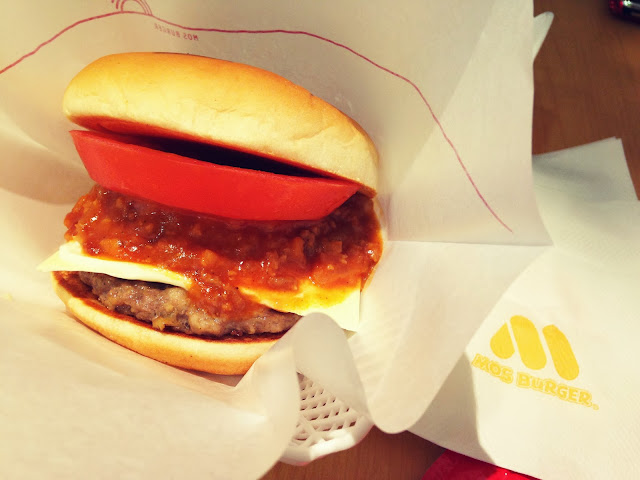 Also, while we were at it, we had Mos Burger for breakfast. 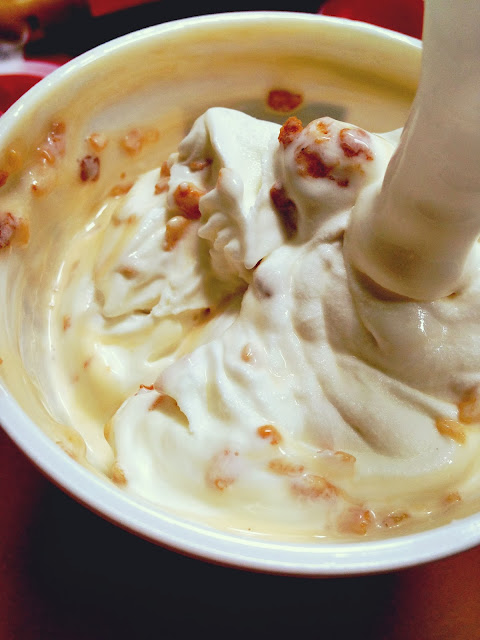 And then I had Durian Mcflurry from McD. Why does Singapore have this and Malaysia doesn't?? 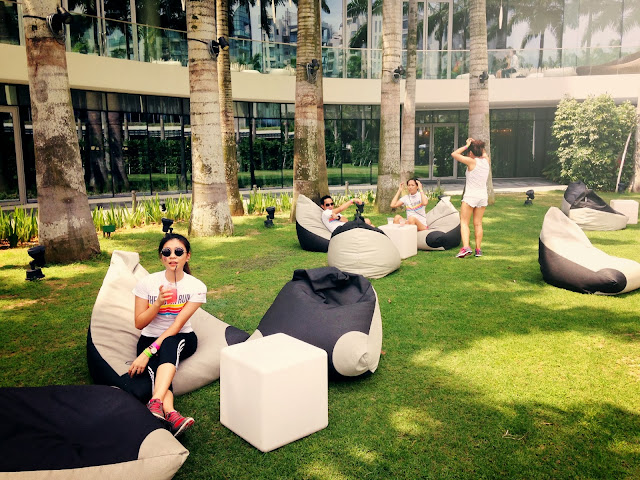 At W Singapore for some sort of pre-run party. 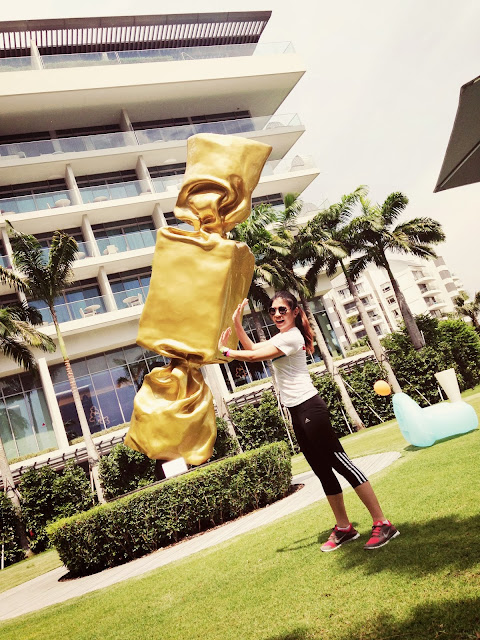 Here's a video taken there and then. 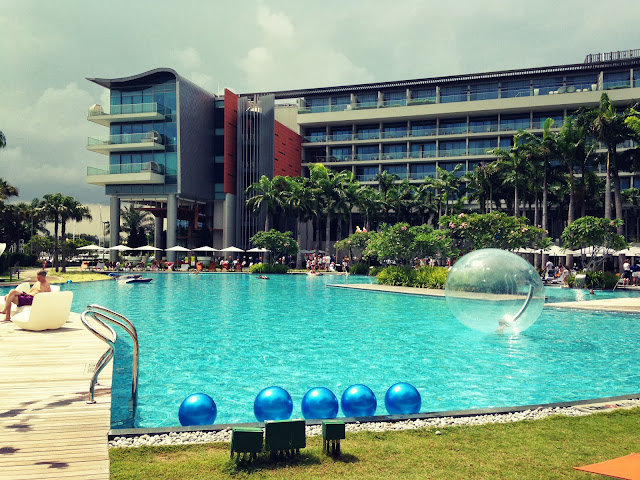 Pretty place but we didn't stay for long. Went and had a beer by the quay instead. 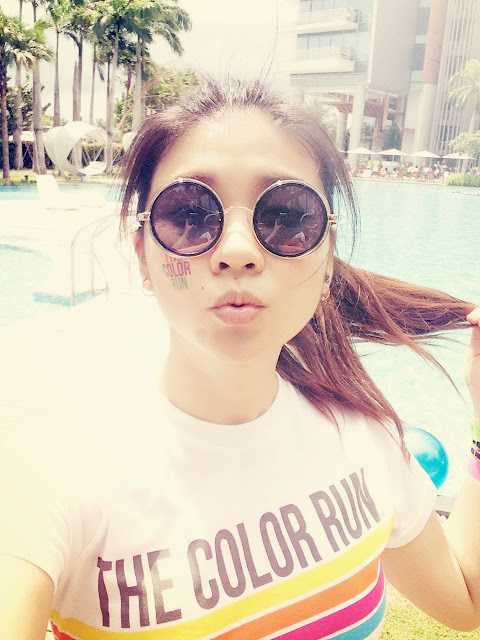 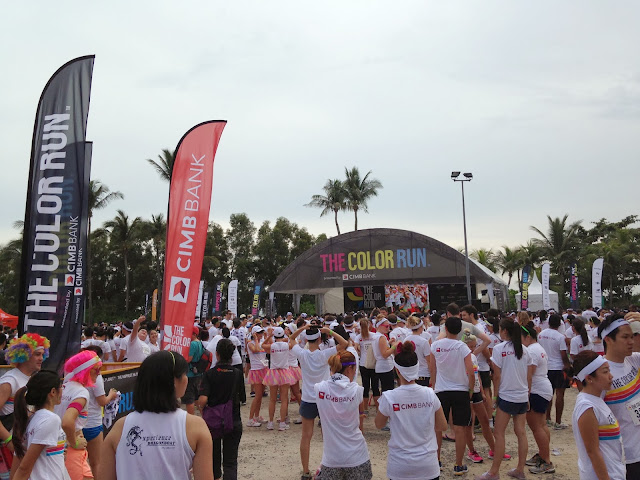 Right! Here we are at the starting point. Check out the funky outfits some people pulled together for the run. 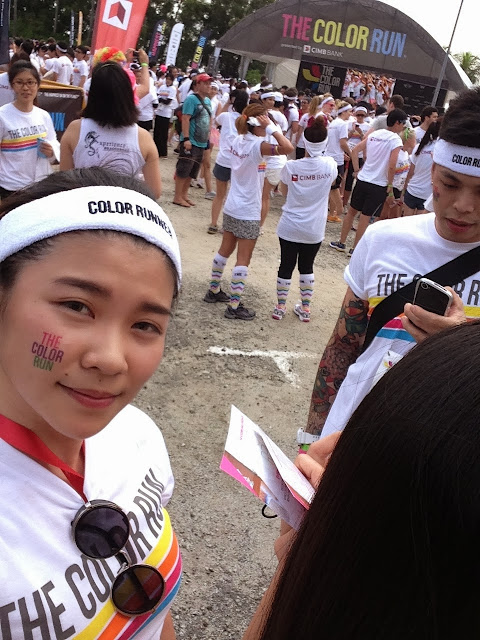 Just waiting for the run to start. 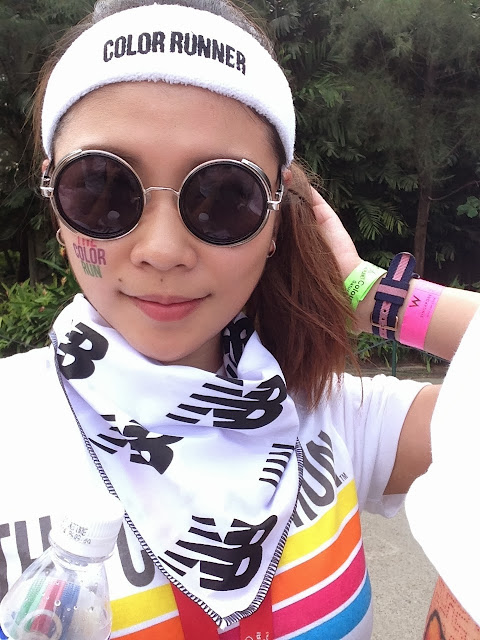 I'm all set! Was wearing my sunglasses/goggles to prevent the colors from blinding me hahaha. 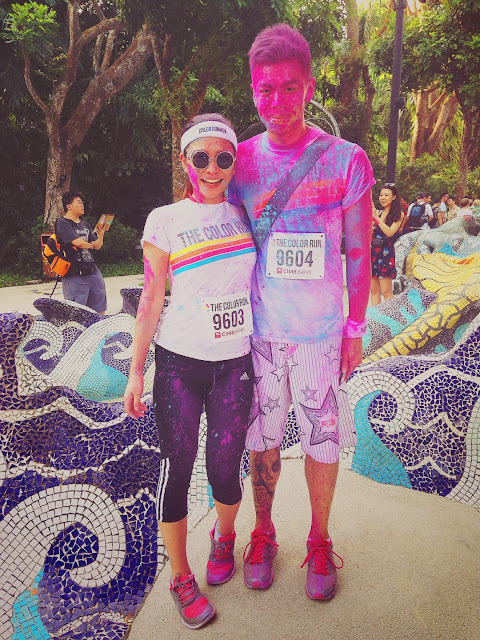 Look! It's Magenta Man! Hahahaha Eric must have been the pinkest man in the entire run. 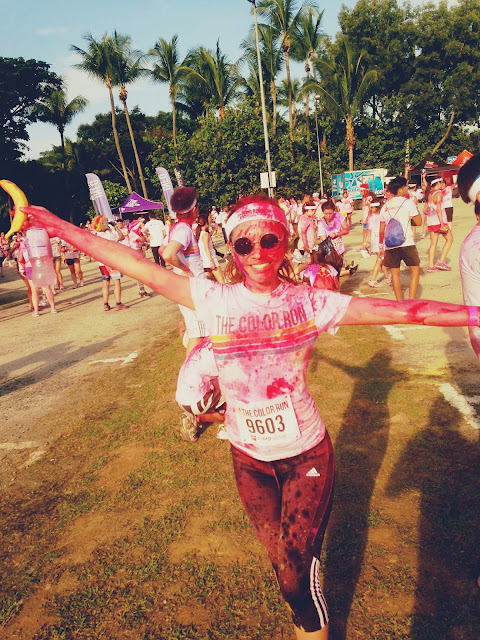 Slightly over half an hour later, we reached the finish line! Here's a banana to reward myself hahaha. Of course, the time was not recorded in this run. The Color Run is all about the experience and fun fun fun! With colors!

An instavid of the finish line celebration! Woohoo! Everyone was in high spirits, it was so much fun! 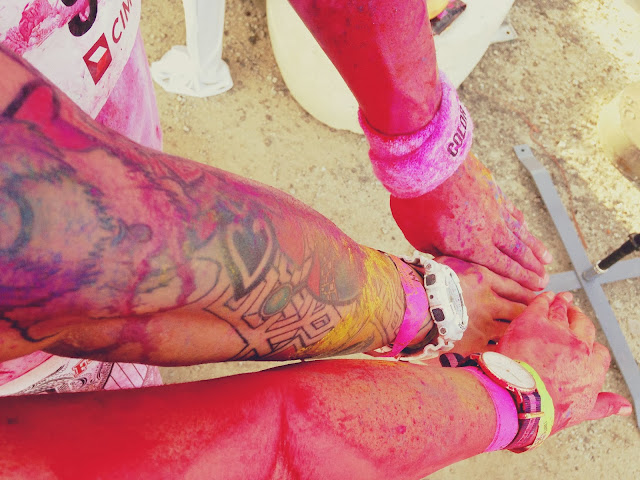 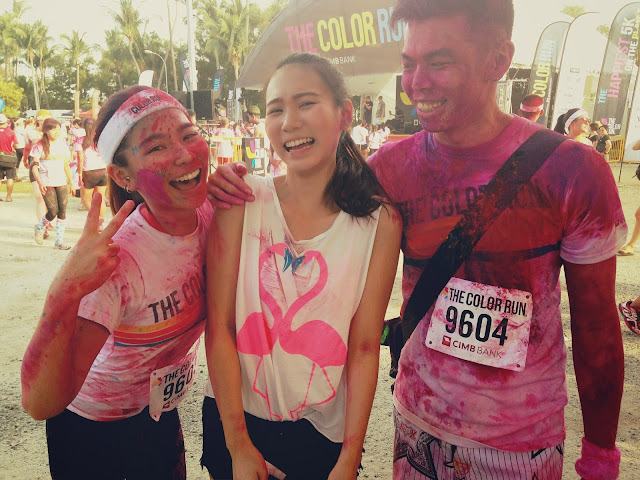 Here's Megan, who has been patiently waiting for us at the finish line. The first thing we did was hug her and spread those colors onto her! 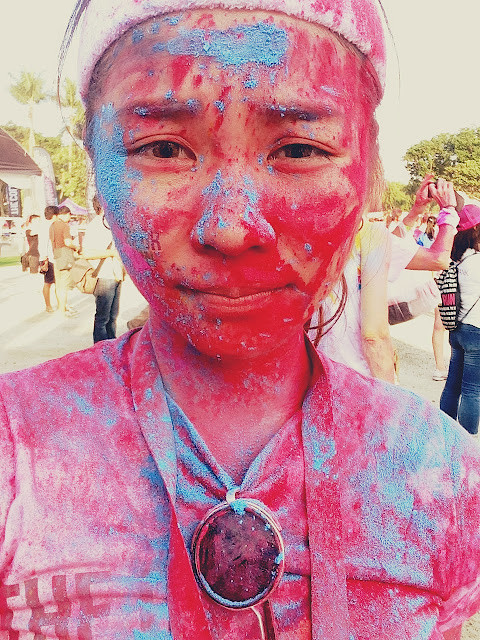 I've never had so much blue and red on my face before. Don't I look attractive? Who needs eyeshadows from Sephora when you can have this! 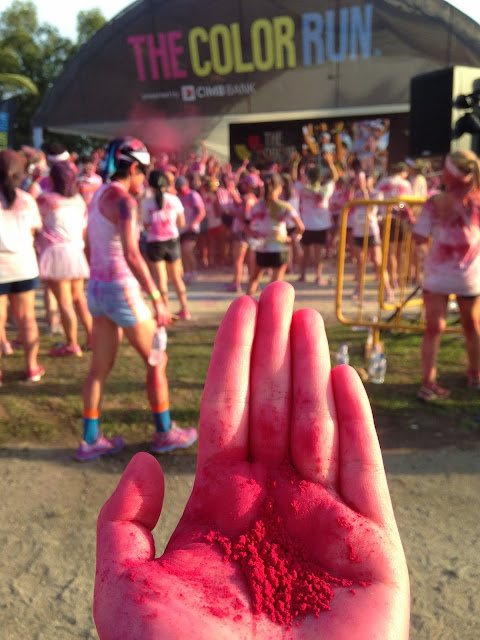 More colors to be thrown around. So pretty! 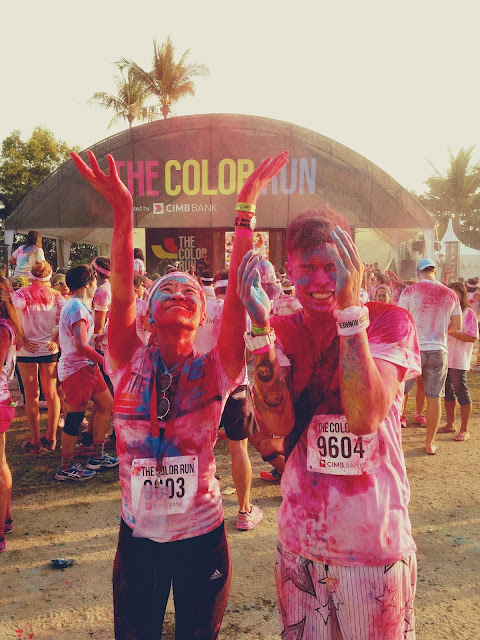 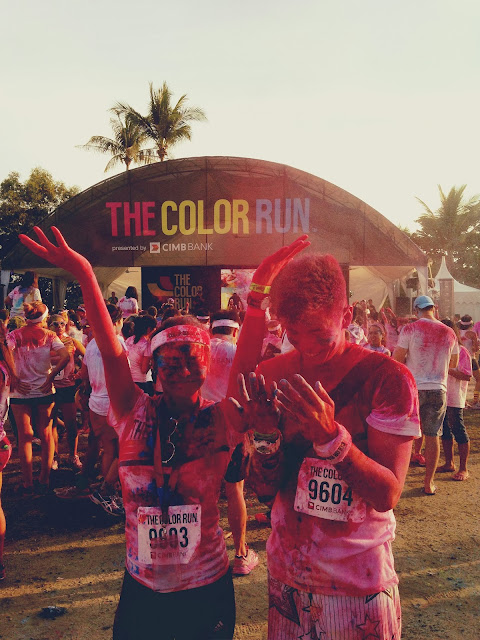 After the run, we packed up and flew back home. So it was like a 24-hour thing, felt like the Amazing Race. Short period of time but it was really eventful and it was really a once in a lifetime thing. 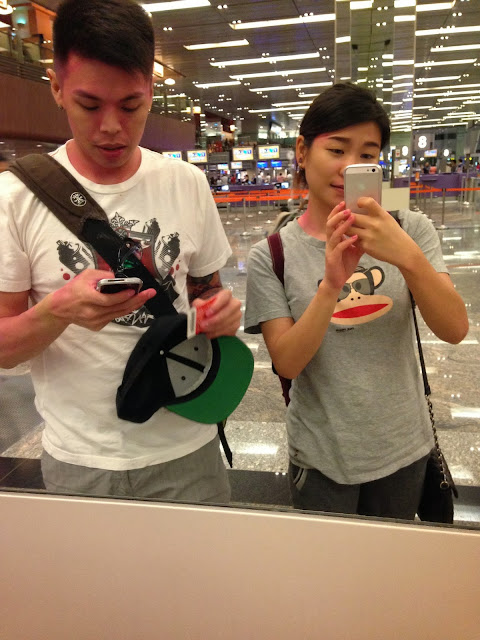 We showered but the colors (especially the pink) were pretty stubborn. I was tainted for a few days. Also, my phone still has some colors stuck in it even till this day. о(ж＞▽＜)ｙ ☆ 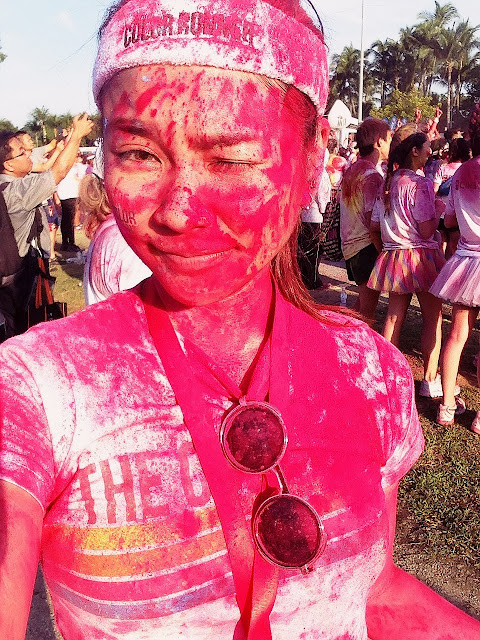 I'd so totally do it again any day.

Here's a video I made. Most were shot during the run itself, so you can see how it was like! Of course, it was way more fun when you get to experience it yourself.