I know I know. I owe this blog several entries: Siem Reap (Angkor Wat & what not), DWP @ Jakarta, Yogyakarta (Borobudur & Prambanan), etc etc. I am the ultimate procrastinator.

But this entry needs to cut queue because I really want my memory of it to be written down in words. 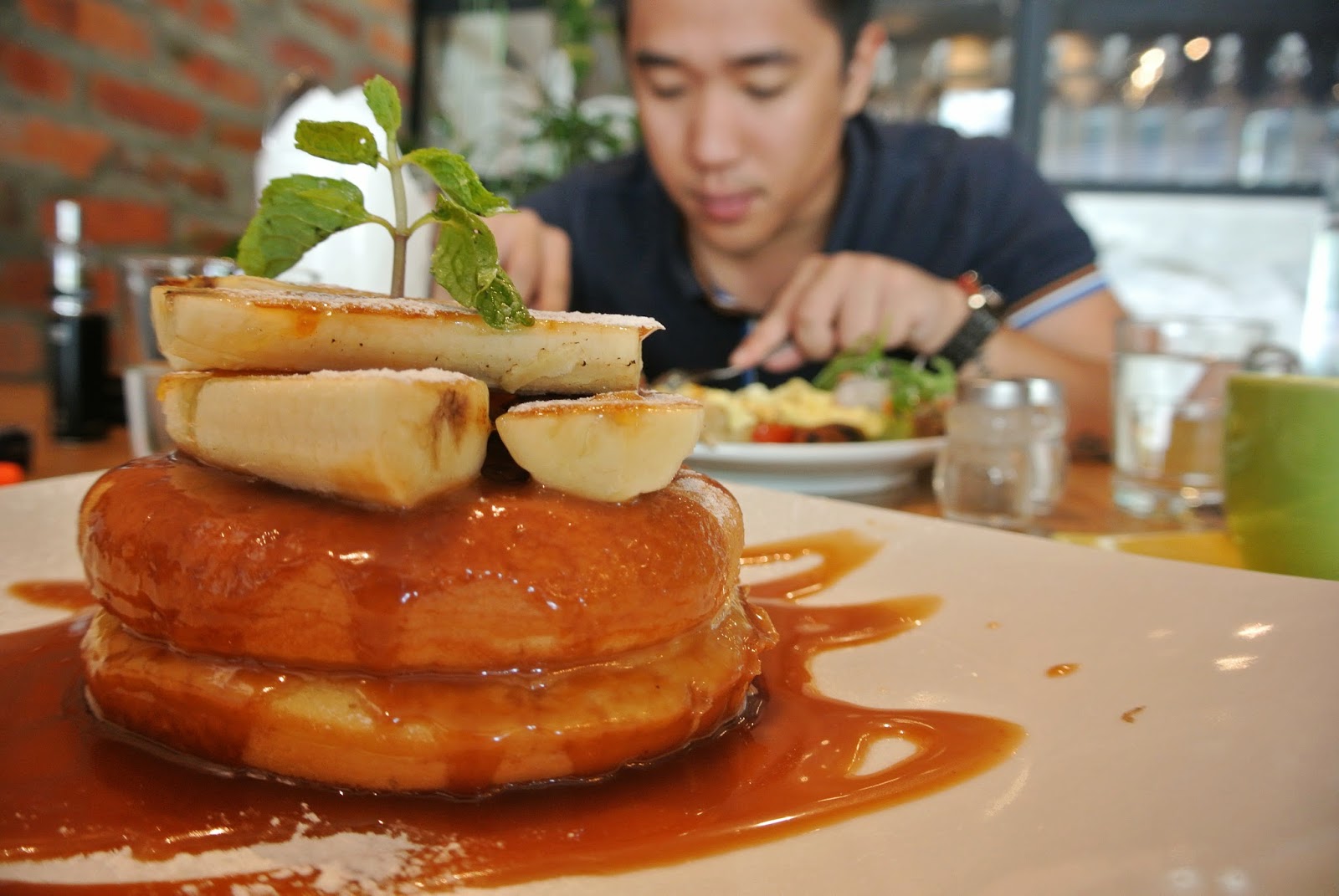 Let's start with a picture of a glorious pancake, taken during brunch with the bff yang paling berprihatin (because he offered to send me to airport). This was the morning of my departure and in case you missed the hints (entry title, the word "airport"), I was about to leave to Japan for 2 weeks. 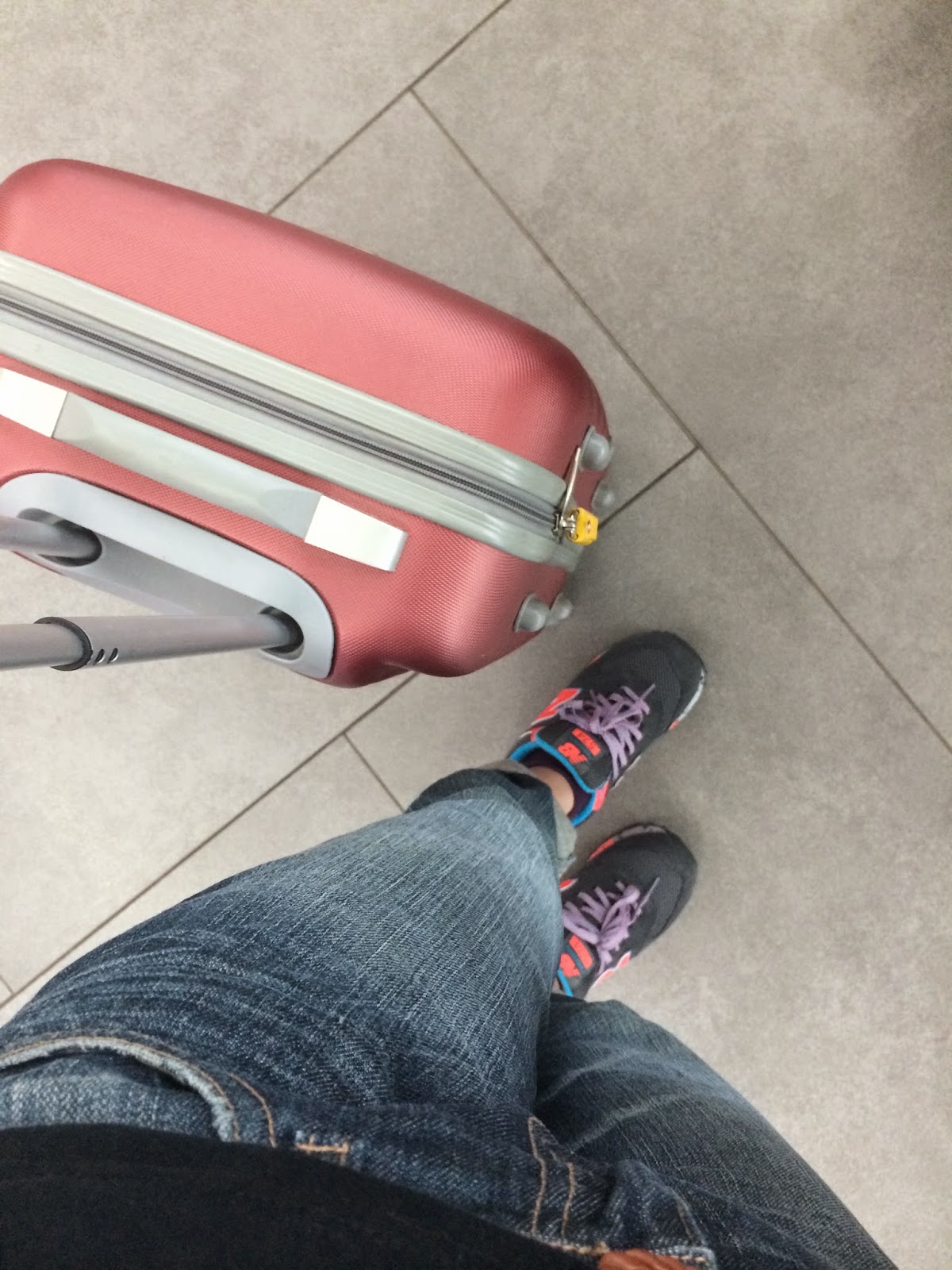 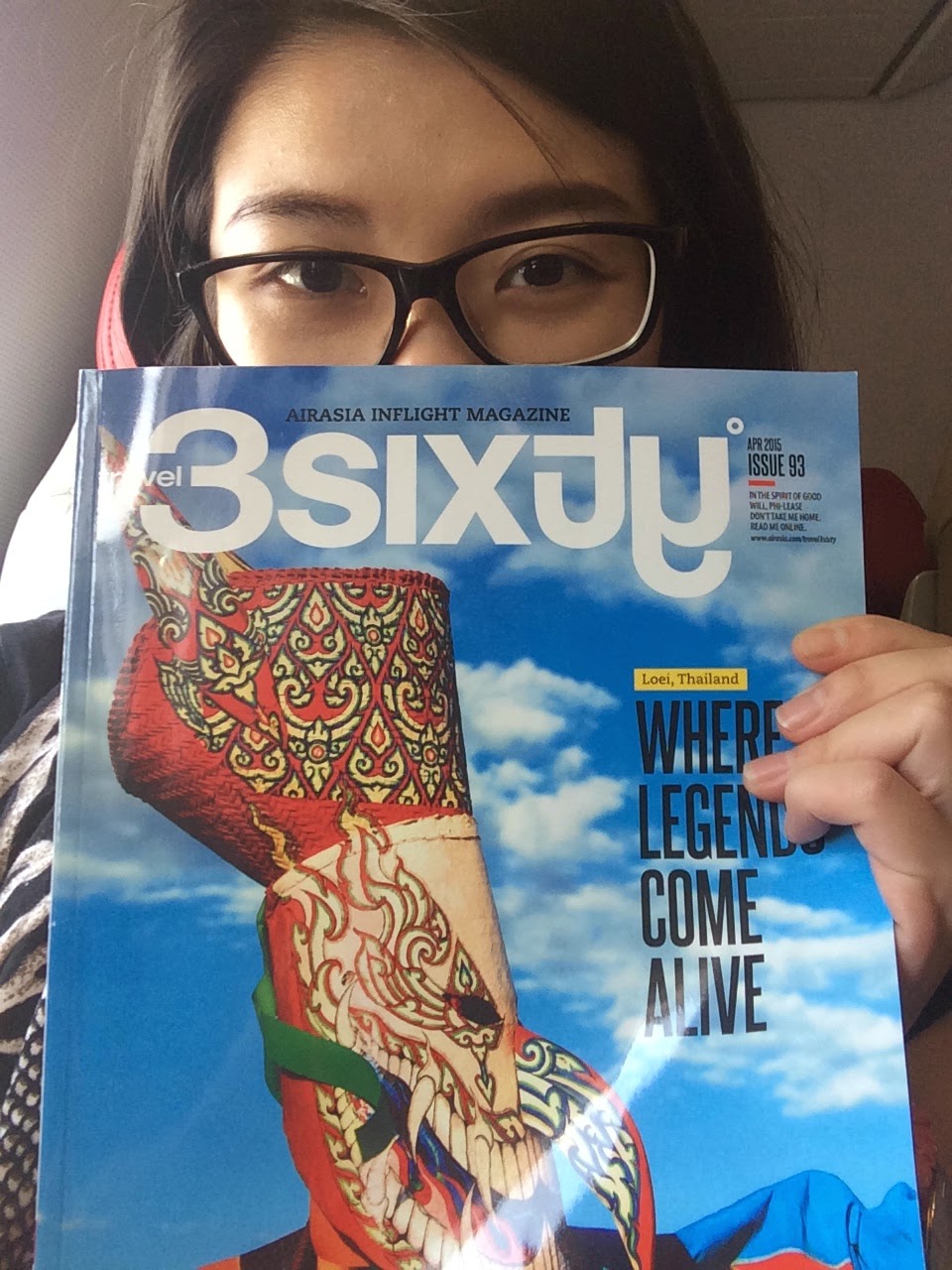 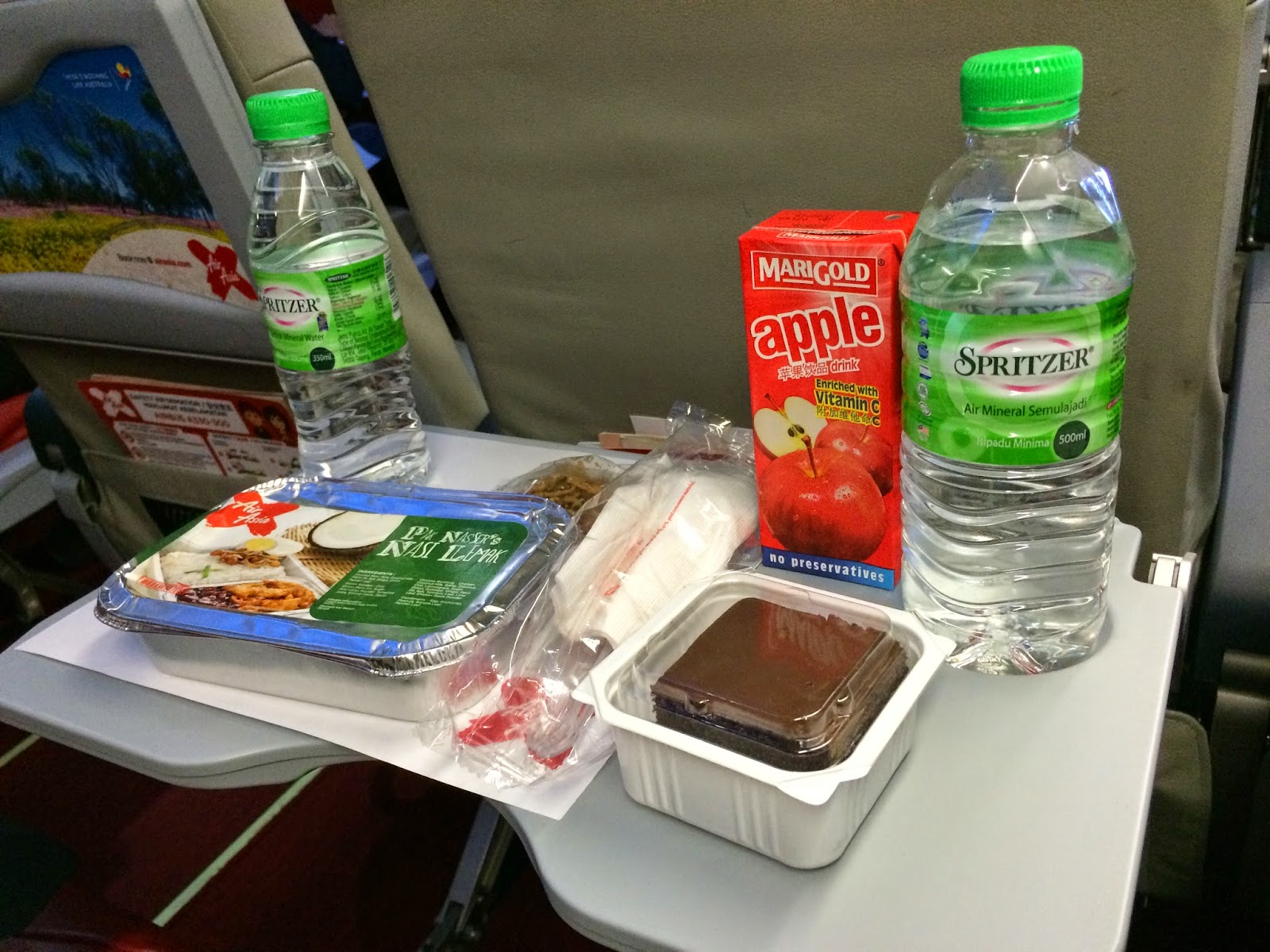 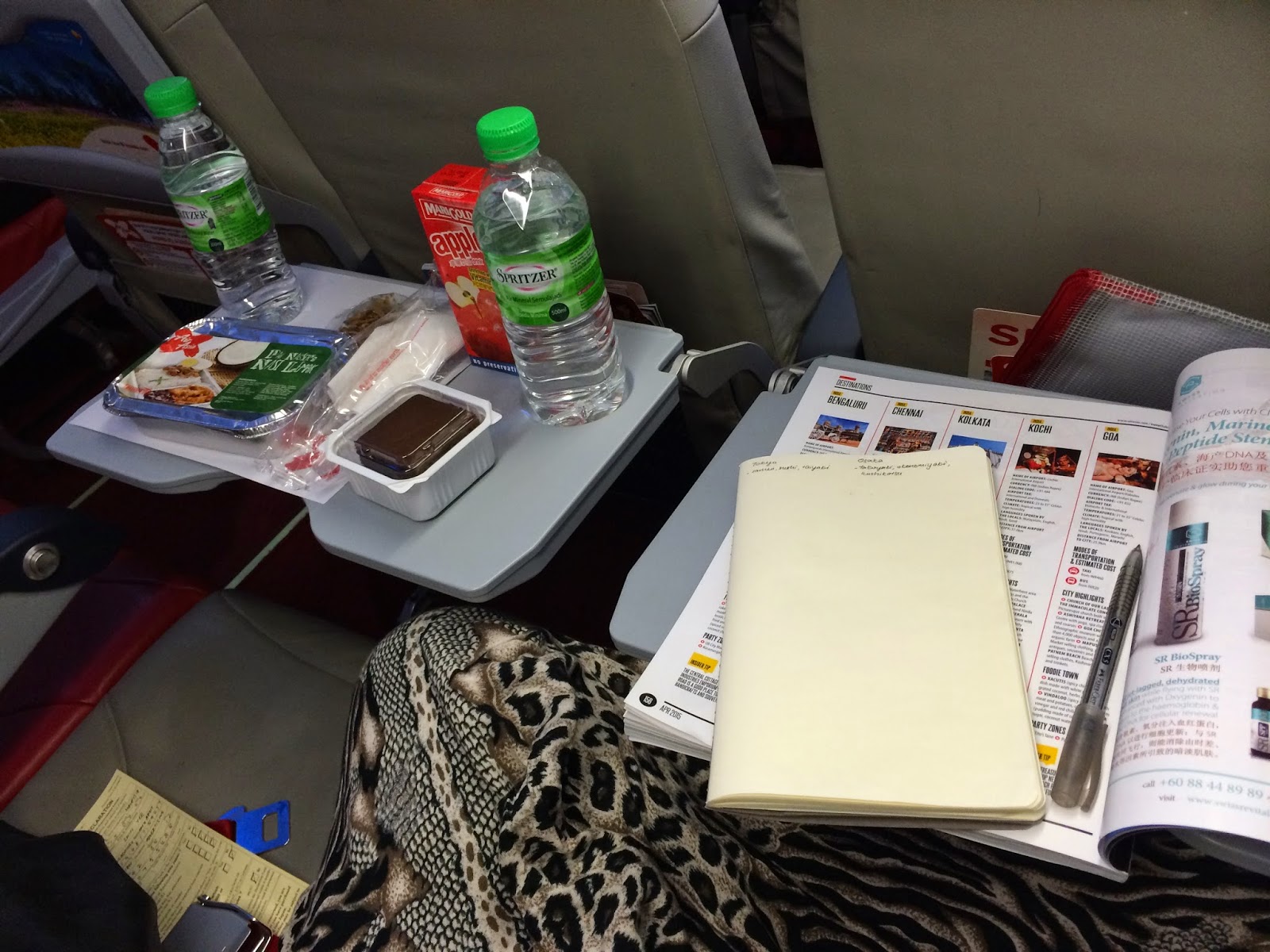 Actually I have the whole row to myself so I was feeling quite boss. 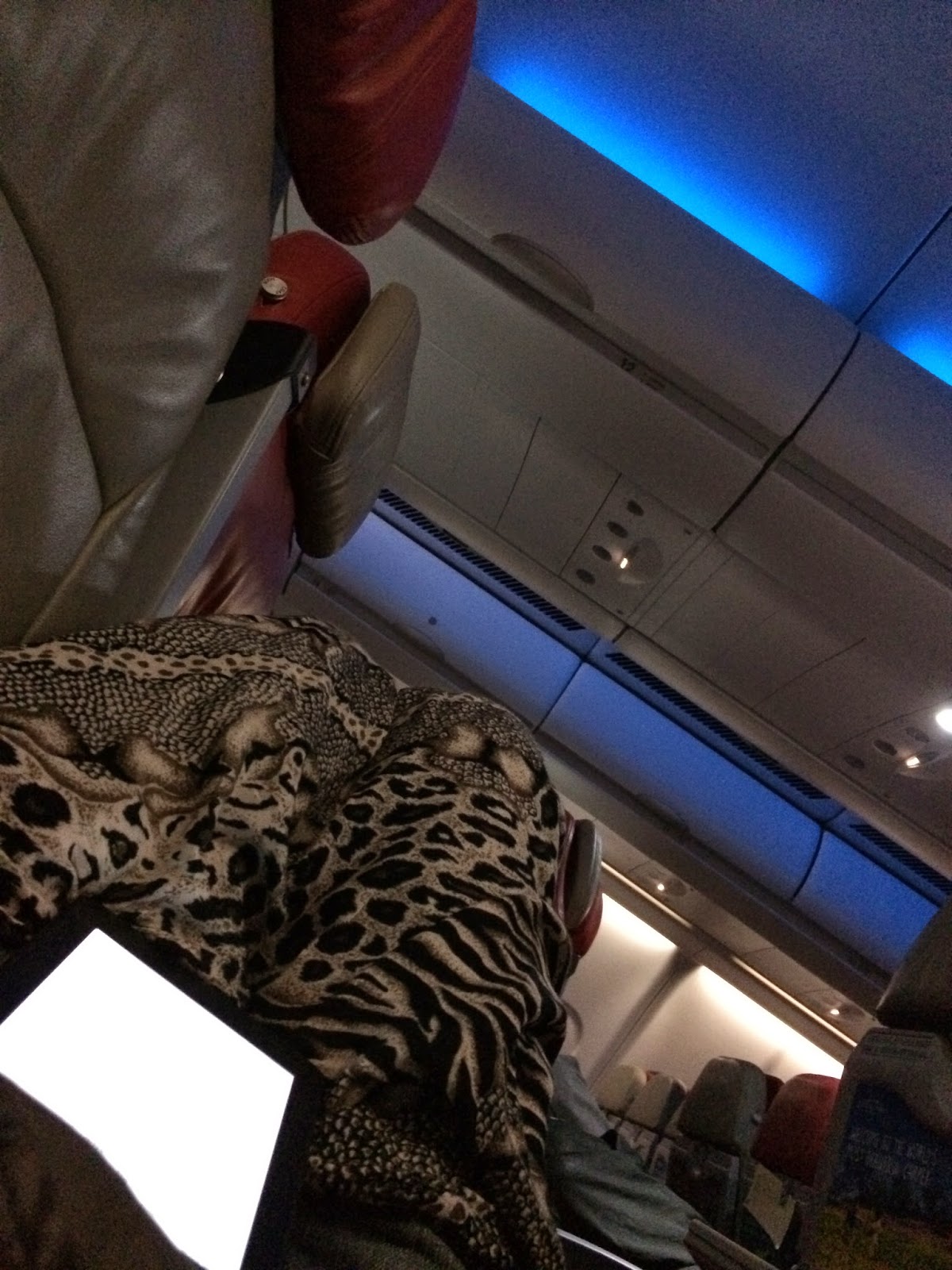 I slept half the flight away. Cannot afford business class so had to sleep on 3 economical seats.

April 6th, 11PM - Haneda International Airport, Tokyo.
Upon alighting the flight, I got a mild culture shock. If there was a fast forward mode. someone must have switched it on  because everyone was walking so urgently. I couldn’t help but to do the same, and I was enjoying it.

The travellators and other machines wouldn’t stop talking to me. Do people really need to be reminded every 30 seconds to “Please watch your step.”?

And then, I finally got to experience the Japanese toilet experience. Though, yes, we do have those in many other places now, but this is the master of all toilet tech alright! Show some respect! One thing I realized about Japanese toilets is that they all have warm seats (thank god!) their auto flushing sound is always on. What has Japanese people got against letting others hear them pee/take a shit? Why else would you be in a toilet stall anyway?

That night, my plan was to sleep at the airport, since I touched down midnight when the trains stopped operating. Taking a cab was out of the question because the price was close to a one night stay at a hotel.

Went to a restaurant named “Food Court” and had my first meal in Japan! I wouldn’t call the place food court because the décor and stuff were more restaurant-ish and the prices too, weren’t exactly food court la. For a bowl of ok-only-tasting udon, it costed me close to RM30. But to have something warm and soupy after a long flight (and in such cold weather too) was incredibly satisfying. Plus, I took a short nap in the restaurant (so it was kind of like +rental fee also heheheh).

Unfortunately, I had to leave the restaurant about 3AM because they were closing up. Now now, where should I go to resume sleeping?

April 7th, 4AM - The hell area of Haneda International Airport, Tokyo.
I chose the worst place ever.

The surface was cold, slippery and hard (those metal seats) and it was right next to the escalator. You know what that means… “Please watch your step.”

I must have listened to that phrase for at least 21600 times that night (every half a minute for 3 hours). My back was aching, but if I had to choose between a soft springy bed and a place where escalators don’t talk… it’d be the latter. 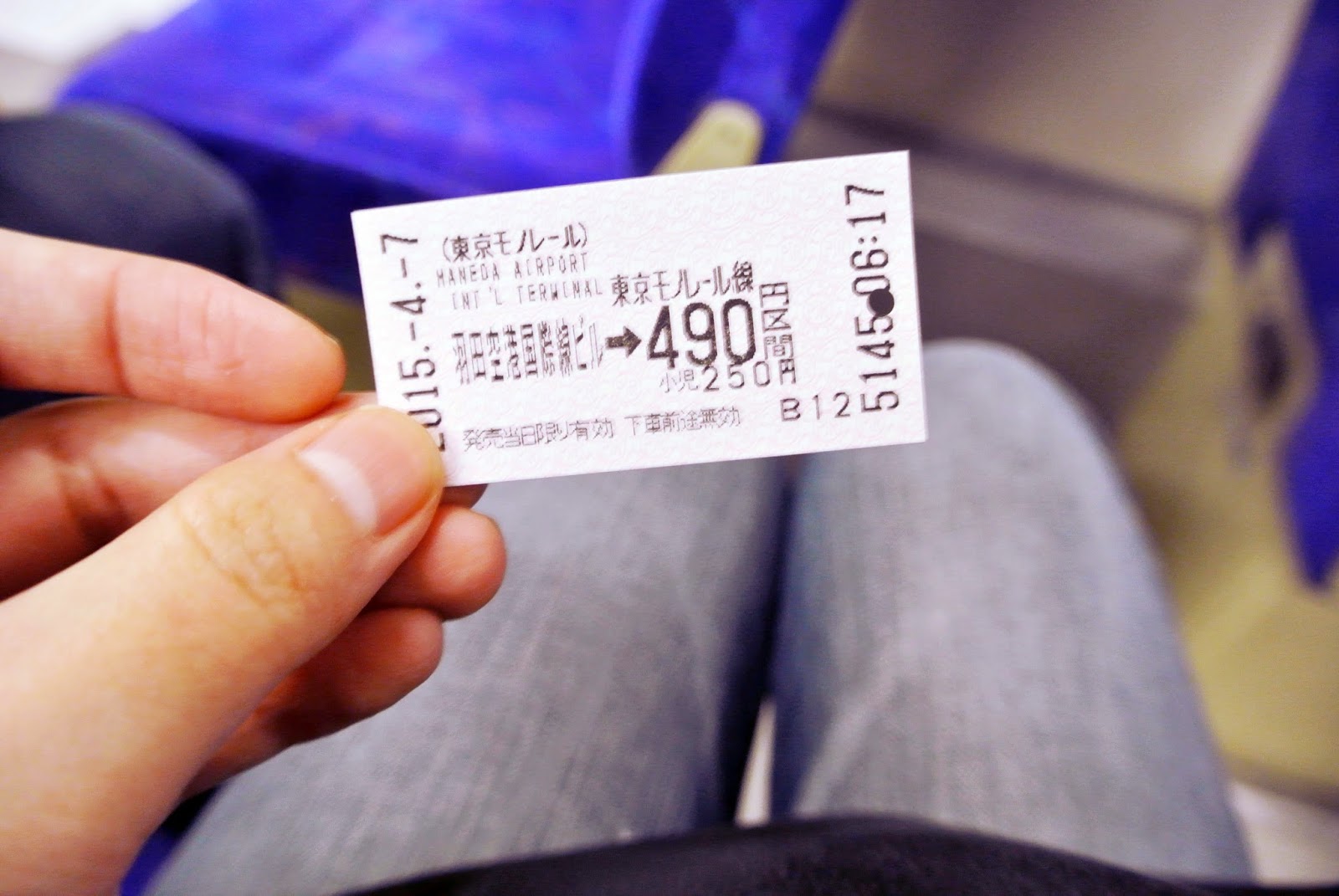 Once it was day enough for the trains to operate, got a ticket and hopped on a train out of Haneda Airport.

The train ride made every pain and annoyance felt the night before all worth it. It was my first glimpse of Tokyo city. I saw sakuras lined up along the streets, and even spotted a horse but that was the only time I saw one in Tokyo (horse, not sakura). It was beautiful. The city was blooming.

My thoughts may sound alone but in person, I wasn't. From the flight.. to the restaurant.. and all the way to the train, Leon was with me. In the train, he told me he was going to Tsukiji fish market for breakfast, and I decided to tag along. Tsukiji wasn’t exactly a priority in my itinerary (ikr, un-boh-lievable) but it was on the way and I didn’t have anything else planned for the morning anyway. It could also be Or maybe it's because I listened to his endless raving about Tsukiji for months before the trip, so.. let’s go check it out!

April 7th, 7AM - Tsukiji Fish Market, Tokyo.
You know you’re in the right place when something smells fishy even in the subway itself.

We didn't manage to experience the tuna auction (got to be there by 4AM in order to do that) but the place was still worth seeing. It was very interesting walking around the fish market. It looked more like an industrial area with the difference being the presence of fishmongers zooming about in their fish scooters (I really really want to ride one).

You can see the environment and the special fish scooters (ok la, the actual term for it is "special vehicle") in this badly taken footage.

The line for one of the more popular restaurants, Daiwa, was insanely long. Word is, if you want a reasonable wait time, you got to be there by 5AM or so. We were there around 7AM, so the wait time was about 2 hours? No thank you. 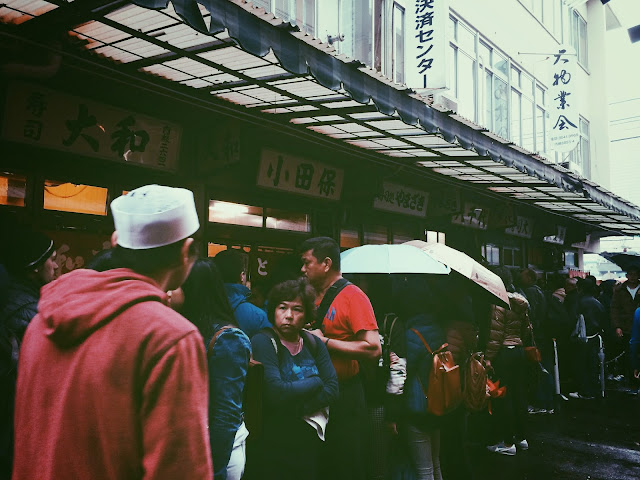 So we went to this less popular (but according to online reviews, is equally as good) restaurant called Okame. The wait was only about 15 minutes! The restaurants in Tsukiji look similar to one another and each of them can only accommodate maximum of 10-12 people at a time.

The restaurants have only counter seats (at least for Okame, that was the case) and the walkways are so narrow that if a big sized person is seated at the counter, the restaurant owners will have to let you use the back way to get to your seat. 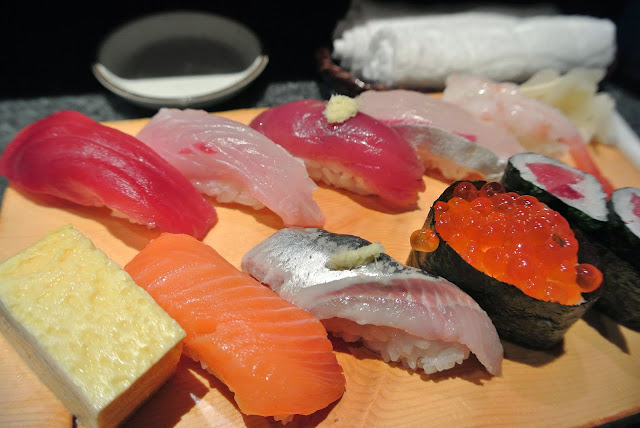 Breakfast is served. Surprisingly, Japanese are very “stingy” with their wasabi. I don’t think it’s because they’re stingy, perhaps they just appreciate the raw flavor more. Anyway, this plate here costed about RM100++ and it was worth it for the freshness and experience. Honestly, more for the experience because I cannot really differentiate how good it is. My judgement of food is very limited, it’s either nice, or not nice. And this, is nice. 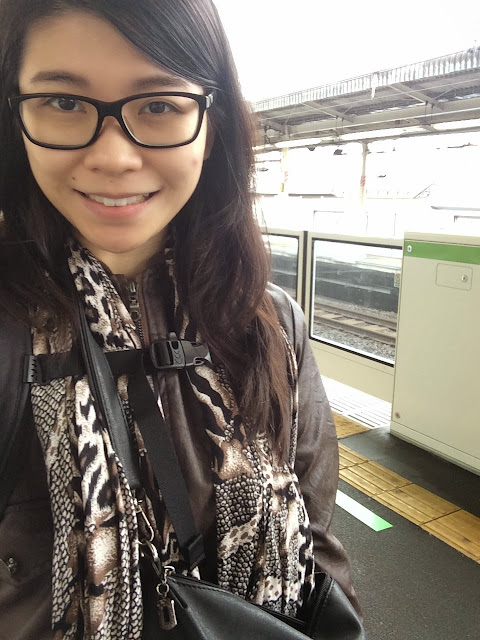 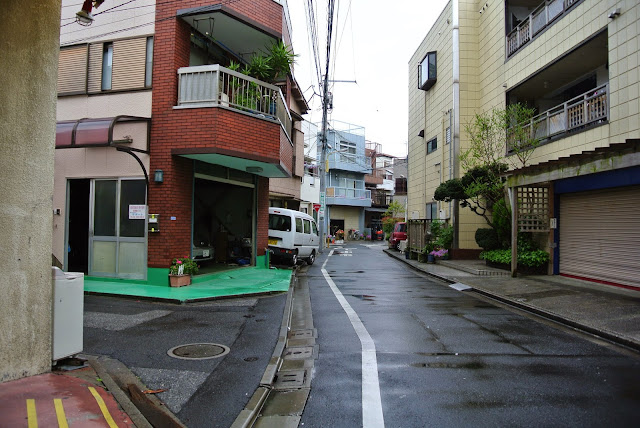 It was my first time using Airbnb and staying in a hostel. Upon reaching the entrance, I wasn’t sure if I was in the right place because there must have been around 100 pairs of shoes there. I looked at the building and I was pretty confident that it isn’t big enough to accommodate that many people laa…

There was no reception whatsoever. I climbed a flight of stairs and find myself in this place: 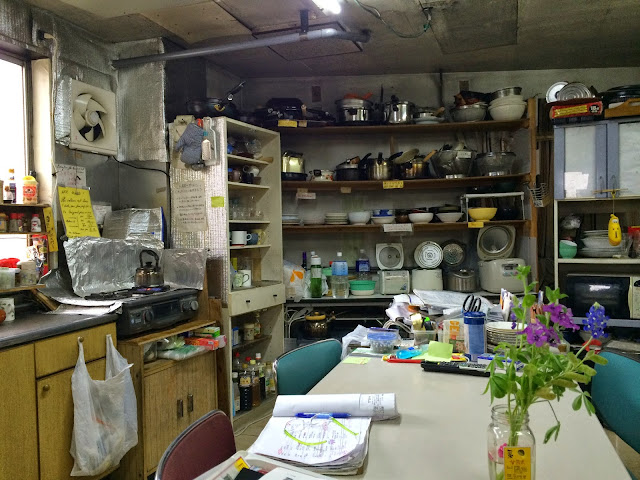 I showed MK this and he asked if I was kidnapped by a hardware store owner.

Shortly after, a friendly obachan came into the kitchen/hardware store (I later found out that it was a communal area) and “registered” me. She led me to my “room”. 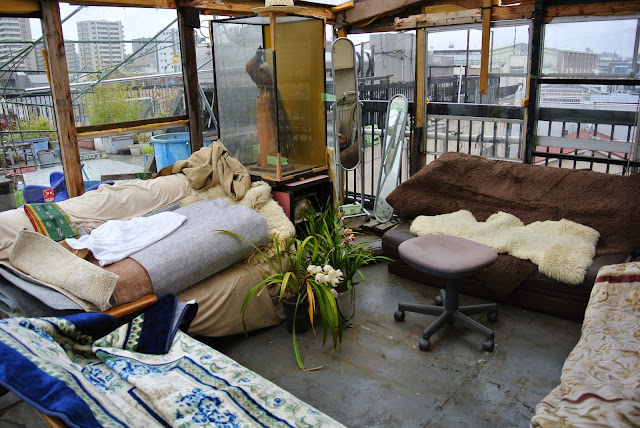 I kid I kid. That's actually another communal area on the rooftop. The peacock is fake... or not.

My actual room was just a small space big enough to fit a smaller-than-single bed and leaving a little floor space for luggage. The floor space is really just sufficient for you to put your luggage there. For unpacking and stuff, I had to do it on the bed.

There was no ceiling, the “rooms” were separated from one another by thin wooden boards. You can really hear every single thing everyone is doing. Like, if you scratch your butt, I hear you. 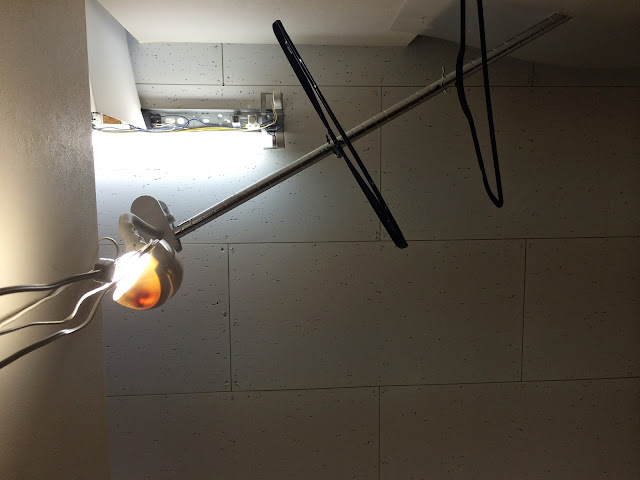 My view when lying on the bed.

Don't get me wrong. Any shelter is a blessing at that moment. I also think that I may have fallen in love with backpack travel because of the people you meet in hostels, the stories you exchange, and what not. I'll story you more on my hostel experience later on.

For now, a plus point for my Arakawa-ku hostel: The rooftop view. 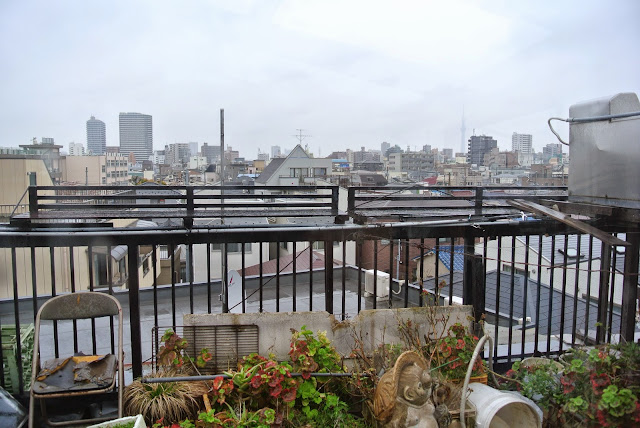 A really great view of the neighborhood. You can even see the Skytree from here. The un-commercialized view really gave me a sense of familiarity, it made me feel as though I belong.

I'll stop here for now, because I took a rest after the check-in.

Next up: Exploring Tokyo.